Spring cleaning, and an apology.

Yesterday we finally had a bit of decent weather; not that it was warm, it snowed the night before, but at the least it wasn’t freezing. I took the nicer weather as a sign that spring is finally springing, so I decided to not only clean out my garage, but the yard as well. It was an all day job, starting at 9 am and not ending until nearly 5 pm. But I managed to get a lot done, most importantly I managed to make my workbench area a lot less cluttered. Much scrap wood, old cans, broken items, and stuff I generally had forgotten existed was either thrown away or donated to goodwill. I’m not finished yet, but I came a long, long way, and my garage should be much more suitable to woodworking when I begin my next project.

As far as woodworking is concerned, my cleanup and reorganization accomplished two things that I had been wanting to finish for more than a year: I was able to move my stain cabinet to the workbench area, and I was able to get my woodworking hardware (nails, screws, handles, knobs, brackets, etc.) organized and into one location that is easily accessible right from my workbench. I even managed to squeeze in a little woodworking during my clean-up. Firstly, I finished the small screw driver rack that I started, and secondly, I got the material for my next hand plane cut roughly to size..

Stain cabinet in place. Right side of the workbench de-cluttered and organized.

I started making a screw-driver rack a few weeks back from some scrap Walnut I had laying around. It was a good excuse to mess around with my hand-tools, and when my new ECE rabbet plane arrived it was a good excuse to put it to use. Before I go on let me say that my little screw driver rack is barely worth noting but for two reasons. The first reason is that I used my drill press to drill out the holes. Yes, I have a drill press. The tool was given to me twelve years ago and I barely use it. I have nothing against using a drill press, but this one is just not accurate enough to use in making furniture. It’s okay for drilling out a line of holes, or some light sanding, but the table is too wobbly and the depth stop not reliable enough for intricate work. The other reason is my smoothing plane.

Walnut board cleaned up. 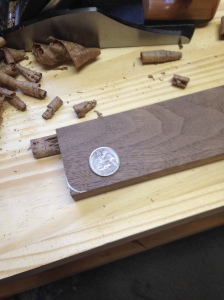 First in War, First in Peace, and First in laying out a corner radius. 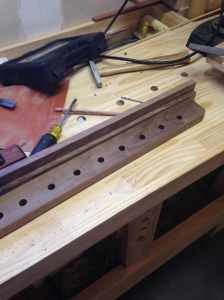 A coat or two of linseed oil.

I have one of the new Stanley Sweetheart #4 smooth planes. I picked it up on Amazon roughly three years ago for the ridiculously low price of $91. It is a good tool that is well made and attractive. My only problem with it is the same problem I have with other smooth planes, and that is the fact that I think smooth planes are overrated. I’ve written about this topic before so I won’t get into it again at the moment. At the same time, just because I felt that way it didn’t necessarily mean that I dislike the tool. Whenever I sharpen, I always give the #4 iron a few passes over the stone just to keep it razor sharp, and I usually take it apart once a month or so, as I do with my other bench planes, just to oil and clean it. Yesterday I used the #4 to clean up the screw driver rack boards both before and after assembly, and I also used it to prep the maple and bubinga I am using to make my next handplane. It was the first time since I’ve owned the tool that I used it for more than a few minutes and I have to admit that it was a joy to use. I was able to take fine and full-width shavings with little effort. Of course the sharp iron helped big time. Nevertheless, it was a joy to use a well-made tool exactly the way it was meant to be used. While I still don’t worship at the altar of the smooth plane, I’m at least at the door of the church. So I have to be forthright and admit that my bashing of the #4 was off-base, and I apologize to those who may have disagreed with my original assessment. 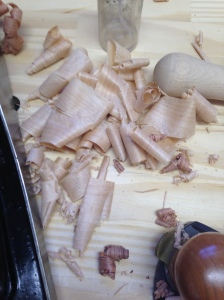 This could be a hand plane in a few weeks.

If you’re interested in picking up some good woodworking tools…

The Butler Did It WoodWorks

So I don’t post here as often as I would like, but I spend a lot of time over on Instagram (@tmb1752 if you’re interested). If you follow me there, you know I’ve kinda been changing my lifestyle in minor increments. i.e. eating healthier, exercising regularly, yoga, etc. Well one of the other things I have been working on is the ability to let go. A majority of that is letting go of stuff, both material stuff and otherwise. If I’ve never mentioned it before, I have a minor obsession with collecting tools. Nothing wrong with it, but I’ve finally decided that with a lifestyle change, this was one area I needed to work on as it is the most painful to think about. Since I am a rip off the band-aid guy, here we go.

I am listing approximately 25 items over the next few days. I like Chris…